Aleksandar Pavić: Is Israel About to Sell F16s to ‘Terrifyingly Revisionist” Croatia?’

According to various Israeli media, during a meeting at the recent Davos World Economic Forum, Israeli Prime Minister Benjamin Netanyahu and Croatian Prime Minister Andrej Plenkovic agreed to “push forward” with a sale of Israeli Air Force F-16 fighter jets worth some $500 million to Croatia

The Croatian index.hr website recently recapitulated an extensive report by the German Deutschlandfunk public radio, describing Croatia as a country “imprisoned by its own past, which it refuses to face” and “veering increasingly to the right,” in which “radical political discourse” and a “climate of hate and intimidation” predominate, and have actually worsened since the country’s accession to the European Union in July 2013.

The main target of hate is the remaining Orthodox Christian Serb minority (Croats are overwhelmingly Catholic), mostly ethnically cleansed from Croatia during Croatia’s war of secession from Yugoslavia between 1991-95, its numbers having been reduced from about 600,000 (about 12.2% of the population) to fewer than 190,000 (about 4.4% of the population) today. As the German radio report puts it, “In the narrative of national heroism, the enemy role is reserved for the Serbs, except if they give up their identity and declare themselves as Croats.”

What should be even greater cause for alarm, especially for Israel and Jews everywhere, is the report’s assessment that the next phase of Croatian nationalism is the rehabilitation of the WWII Ustashe regime, almost certainly the most despicable of all the Nazi puppet regimes, responsible for the genocide of hundreds of thousands of Serbs and tens of thousands of Jews and Roma.

The German radio report, while certainly newsworthy and valuable, is hardly a revelation. Warnings about Croatia have been circulating for years. Among others, British historian Rory Yeomans, author of books such as Visions of Annihilation: the Ustasha Regime and the Cultural Politics of Fascism, 1941-1945 and The Utopia of Terror: Life and Death in Wartime Croatia, has labeled Croatia’s WWII revisionism as “terrifying,” and that “revisionist views of the wartime Ustasha movement and the Nazi-allied Independent State of Croatia, NDH, have entered Croatia’s political mainstream in recent years.”

This should come as no surprise, in view of the fact that the father of today’s Croatia and its first president, Franjo Tudjman, after whom the airport in Croatia’s capital city, Zagreb is named, along with numerous streets, institutions, parks, schools and public venues throughout Croatia, was a notorious WWII revisionist who emphasized newly independent Croatia’s continuity with the WWII puppet state, which, in his own words, “reflected the centuries-old aspirations of the Croatian people.” His attempt to whitewash his past by attending the opening of the Holocaust Memorial Museum in Washington DC in April 1993, was met by condemnation on the part of Holocaust historians and survivors, including Elie Wiesel and Rabbi Marvin Hier of the Simon Wiesenthal Center for Holocaust Studies.

In a letter to the New York Times of December 24, 1992, David A. Harris, Executive Vice President of the American Jewish Committee, warned of Tudjman’s anti-Jewish views:

“Croatian Jews, Mr. Tudjman wrote in his book ‘Wastelands: Historical Truth’ (1988), used their supposed traits of ‘selfishness, craftiness, unreliability, miserliness, underhandedness and secrecy’ to gain control of the Jasenovac concentration camp (where tens of thousands of Yugoslav Jews and others perished) and victimize others. Jews, he alleged, are commanded to ‘exterminate others and take their place’ because they consider themselves the chosen people. Israeli policy toward the Arabs, according to him, makes them nothing less than ‘Judeo-Nazis’.”

Perhaps Tudjman would’ve been kinder in his remarks had he anticipated that the “Judeo-Nazis” he despised would be offering his own successors (Croatian Prime Minister Plenkovic is also president of HDZ – the political party that Tudjman founded) advanced fighter planes just a couple of decades later. In any case, once again, realpolitik (or, perhaps, just plain greed) has brought together the oddest of bedfellows…

As irony would have it, on the same day (January 25, 2018) that Mr. Netanyahu was pitching his F-16’s to Croatia, Israeli professor Gideon Greif was giving a lecture entitled “Jasenovac – the Auschwitz of the Balkans” at the UN building in New York, as part of a joint Serbian-Jewish exhibition “Jasenovac – the Right Not to Forget.” Jasenovac was the most notorious Croatian WWII death camp, in which, according to the report of a post-war Yugoslav government commission, 500.000-600.000 people were savagely slaughtered, mostly Serbs, followed by Jews and Roma. Dr Greif, a renowned scholar and chief historian of the Israeli Shem Olam Faith and Holocaust Institute for Education, Documentation and Research, deems Jasenovac to have been “even more brutal by its atrocities than Auschwitz.” As he put it in a 2017 interview for the Belgrade daily Vecernje Novosti, as a reaction to Croatian attempts to revise history, specifically the push for the canonization of WWII Croatian Catholic Cardinal Alojzije Stepinac:

“It was hell on earth. That is why in Jasenovac the Croatian hands are completely covered in blood… The Germans had camps for women, men or mixed, where children were with the adults, but the Croats went a step further and even had children’s camps. Horror.”

(Nikola Popović, a member of the Serbian Academy of Science and Arts gives a figure of 24,911 children, mostly Serbian, exterminated in Jasenovac.)

As expected, the Croatian government vehemently protested the exhibition at the UN, accusing Serbia of “manipulating and disseminating false information,” after previously unsuccessfully trying to block the exhibition. Greif would have none of it. In an interview for Deutsche Welle in Serbian, he dismissed the official Croatian complaints:

“In my opinion, this exhibit should in no way be controversial. It is based on historical data and does not contain anything that could not be supported with evidence.”

He also cautioned regarding further attempts at historical revisionism, by Croats and others:

“As a historian, I can only say that the twisting of history is a dangerous thing. And it is dangerous what some people are trying to do in terms of twisting historical facts connected with Jasenovac victims.”

Finally, it should be added that present-day Croatia is mimicking its WWII predecessor state in another important way – in its enthusiasm to fight on the “Eastern Front.” In July 1941, thousands of Croats enthusiastically volunteered to join the German invasion of the Soviet Union, initially as part of the Croatian 369th Reinforced Regiment of the Wehrmacht, attached to the 100th Jäger-Division, which was ultimately destroyed at the Battle of Stalingrad, where it was the sole non-German unit participating in the attack. But the Croat anti-Russian enthusiasm could not be contained, leading to the formation of the 369th (Croat) Infantry Division, nicknamed “Vražja” or the “Devil’s Division.”

Today, according to Croatian media reports, Croatian troops are, proportionally, the most numerous NATO troops deployed towards the Russian border, in Lithuania and Poland, with a total of 258 soldiers, NCOs and officers (Croatia joined NATO in April 2009). In addition, Croatia has offered to help Ukraine with the “peaceful reintegration of the occupied territories“ of Donetsk and Lugansk, prompting Russian foreign minister Sergei Lavrov to remind of the “peacefulness” of Croatia’s own recent reintegration efforts:“It is a well-known fact that large-scale military operations by the Croatian army in 1995 resulted in many casualties and the forced the exodus of some 250,000 Serbs from the country.”

Will revisionist and “peaceful” Croatia soon be reinforced by Israeli F-16s, proudly displaying, in what would make for historical irony par excellence, the trademark Croatian checkerboard, barely distinguishable from the notorious Croatian Nazi puppet coat of arms? Stay tuned. 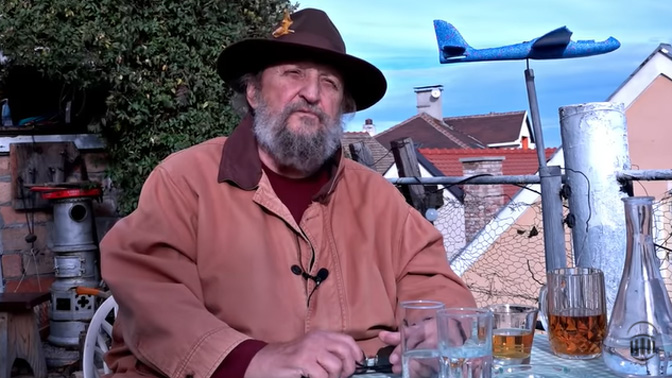