Due to the absence and ban of any systematic research after the war (” Brotherhood and Unity”), the exact number of the dead children couldn’t be determined with certainty 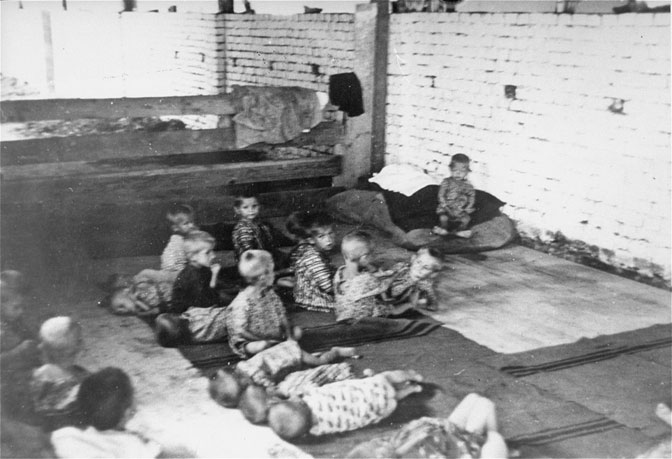 The Croatian concentration camp in Sisak was founded on 3. August 1942. after the Croatian operations in Kozara and Samarica once were completed. This notorious conc camp consisted of special part oﬃcially called ” Shelter for the refugee children .” Children camp in Sisak, the largest of that type within NDH (Independent State of Croatia), was under the auspices of the ” Ustasha movement female lineage” and ” Ustasha Security Service”, under the direct control of ustasha Dr. Antun Najzer .

Caption: Serbian children in the Croatian concentration camp; ( from Yugoslav WW II archive) The camp was located in several buildings in the city: in former Yugoslav Falconry Association building (so-called Sokolana) , in the nunnery of the (Roman Catholic) Sisters of St. Vincent , saltwork Rice warehouse , Guci building , in the elementary school in New Sisak and in so-called Quarantine in one of six concentration camp barracks. 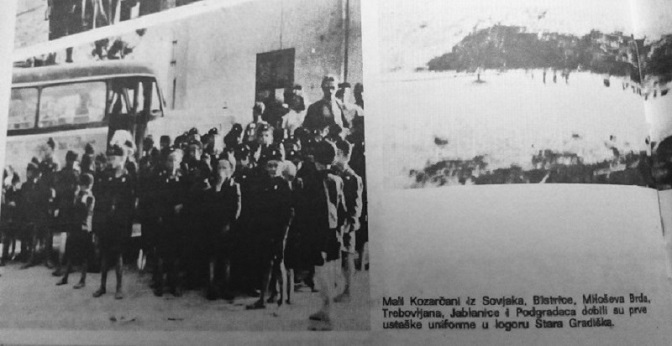 All these buildings were mostly unsuitable for the housing of children. For example in the Falconry association, there were no doors; it was drafty because the whole construction was set up for drying the salt. The baby prisoners, even the smallest one who was only a few months old, had to lie on the ﬂoor with only a thin layer of straw, without any clothes or blankets. The ﬁrst group of Serbian children arrived in Sisak on 3 August 1942; there were 906 of them. The very next day another group of 650 children was brought; in the third group (arrived on 6. August ) was 1 272 children. In Teslic glasshouse and the newly built barracks, named ,,Karantena” a general concentration camp for men, women and children had been established. During August and September 1942, Croats deprived 3971 Serbian children of parents who were selected for forced labour in Germany.

Thus from August 1942. – 8 February 1943. there was 6693 detained children, boys and girls, all of them Serbs from Kozara, Kordun and Slavonia. Despite the actions of Diana Budisavljević and tireless group of humanists – Jana Koh , Vera Luketic , Dragica Habazin – Majka (‘ Mother’) , Ljubica and Vera Becić , Dr. Kamil Bresler , Ante Dumbovic and sisters of the Red Cross , great number of imprisoned children was dying every day : up to 40 every 24 hours. Dr Lazar Marguljes, a doctor from Osijek testiﬁes about unimaginable conditions at Sisak concentration camp: ” I’ve noticed that the food parcels sent by Red Cross have never been given to the imprisoned children. My duty as a medic was to research these small prisoners, therefore I often visited these places: former Yugoslav Falconry Association building (‘ Sokolana’), where the children lay on bare concrete or, if they had little luck, on a straw.

The so-called hospital, in a small school in Old Sisak , had no beds so the children were lying on the ﬂoor with a little distracted and contaminated straw, which was made with blood and excrement, covered with swarms of ﬂies. These children were kept naked and barefoot, with no covering. When typhus broke out, doctor Najžer ordered a transfer of infected children to the so-called Hospital, which caused increased mortality among the children. “ One of the most shocking testimonies was the one of Jana Koh , former secretary of Red Cross Croatia: ” The barracks were connected by passages guarded by Ustasha guard. Even though away from the barracks, I often heard the sad cry of the imprisoned children. They were placed on the bare ﬂoor, four hundred children: infants, few weeks together with the several months old and the older were ten years old.

How many children were there, and where the Croats took them later – that was impossible to ﬁnd out. The children in Children’s barrack inconsolably cried and called their mothers, who were only a few meters away; but the fascist Croats sadistically forced them to listen while keeping them away. Some older children tried to talk to us, always through tears; they needed to calm and feed the little ones who were starving; there was no one to swaddle the babies, so the older kids believed they will all die.

These children, bellow ten years old, were begging: ” Oh, come, my sister .. mother, save us, bring at least these little ones to their mothers! Because they will die of tears .”

Bringing these children to the mothers wasn’t easy for any of us, yet we managed – during the night 10 – 11 October we were all prepared to transport the children to Zagreb. The mothers from conc. camp gave their last breastfeed to their children, calm and soothe them; but they had to leave them immediately, for we had to return to the camp. But no one could ever describe the joy of the children when they saw their mothers. Their small hands were embracing their mothers’ necks, and heavy moans echoed the previous sadness for a long, long time. From these small, excited hearts a deep and heavy sighs came out. Their starving mouth grabbed their mother’s breast; their heads were wet from big teardrops falling like rain from their silent mothers. When the last child, exhausted by sadness fell asleep, their mothers quietly disappeared in the opposite hut.

At the door, each of them turned with their bare heart in the suﬀering eyes, and whispered the litany: ” Take care of our children, take care of them, dear .” One shipment of 550 children was sent to Zagreb and the only thing we could do was to inform the mothers about the addresses so they could look for the children once they return from abroad (they were dispatched to Germany the same night, a couple of hours later). ” ( Dragoje Lukic: ” Parent mowing generation ” Museum of the Victims of Genocide, Belgrade, 179 p. )

According to the records of Ante DUMBOVIĆ , the 1 200 children were given to their relatives and 2200 to the citizens of Sisak ” for ‘breeding’. We’ ll never be able to determine the exact number of Serbian children who died in this Croatian concentration camp. According to the testimony of Francis, the undertaker, the number of dead children in coﬃns was always greater than the number from the records. Besides that, infants have never been enumerated. According to the DUMBOVIĆ records, during ﬁve months in 1942. 1630 kids have died. According to the coroner, Dr David Egić,152 children were buried in Sisak. The monument to the children holds a number of 2,000 killed Serbian children. In any case, the number of burials in the cemetery would have been much higher if there hadn’t been the rescue operations and the ” colonization ” of abducted children. Although these actions often meant only delayed death – either due to irreversible exhaustion of children, either because of occasional Ustasha ‘activities’ when they chose one or more children and kill them together with their parents. 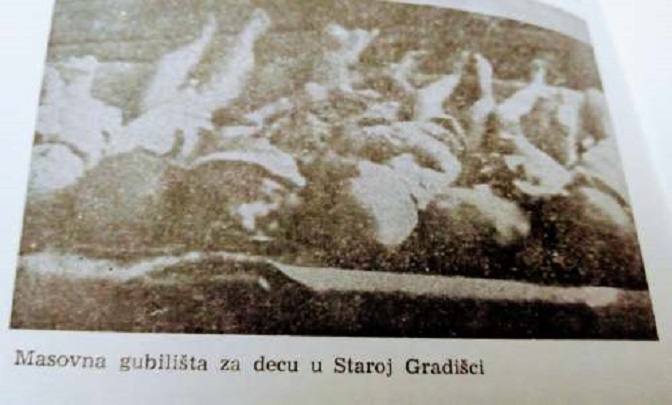 Due to the absence and ban of any systematic research after the war (” Brotherhood and Unity”), the exact number of the dead children couldn’t be determined with certainty. At the end of the war when people returned from captivity, they set oﬀ in search of loved ones. The Diana Budisavljević ﬁles could be used for only a short time: at the request of the new Croatian government, Department for the Protection of People (notorious OZNA), Croatia seized Diana Budisavljević ﬁles containing materials about Kozara children as well as her album with photographs of Ustasha camps. Soon after that, all work on the record has slowly been abandoned. Thousands of children and their parents were searching for each other for a long time, with little or with no success. It is estimated that around 5000-7000 children passed through this Croatian concentration camp until its ﬁnal closure on 8. January 1943. According to the coroner, 1,152 Serbian children died; other data exposes 1,631 children died in Sisak concentration camp. 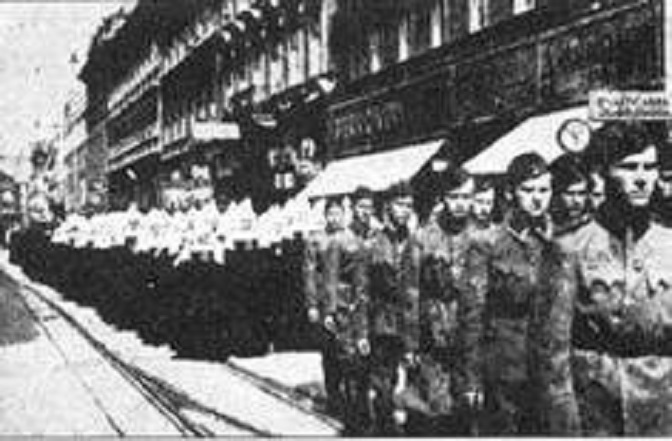 This is not a misnomer, an accusation, and even less a speculation. It is a historical fact. Rabid nationalism and religious dogmatism were its two main ingredients. During the existence of Croatia as an independent Catholic State, over a million men, women and children, mostly Serbian Orthodox, perished. Many were executed, tortured, died of starvation, buried alive, or were burned to death. 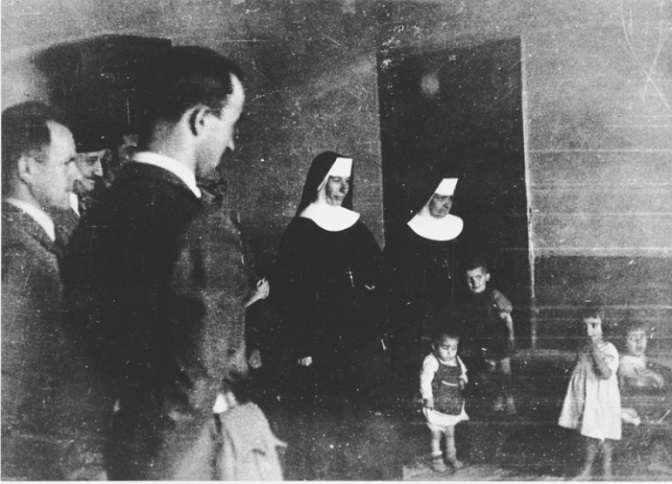 Roman Catholic Church has been directly involved in genocide against Serbs in Croatia. Picture: Catholic nuns with imprisoned Serbian children (Museum of Genocide in Yugoslavia)

Hundreds were forced to become Catholic. Catholic padres ran concentration camps; Catholic priests were officers of the military corps which committed such atrocities. 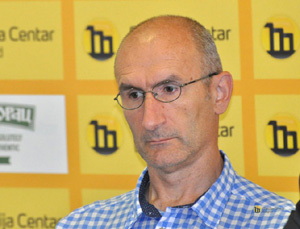 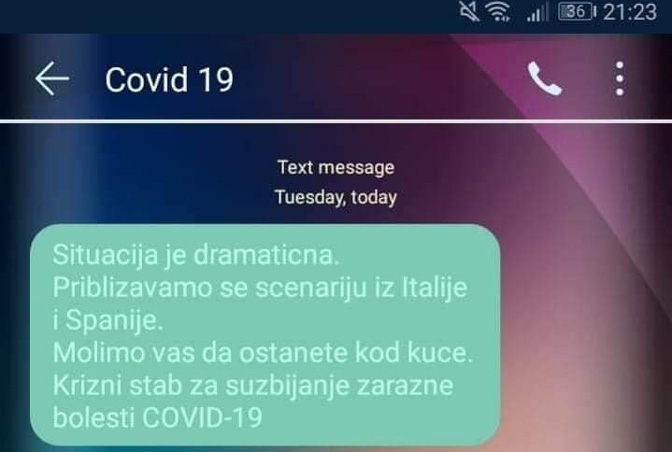