Interview with Manuel Ochsenreiter, German publicist and editor in chief of the German monthly magazine Zuerst about German politics, relations between Germany and the US, economy and public attitudes toward anti-Russian sanctions and the reasons for the Ukrainian conflict.

DT: A few days ago German Chancellor Angela Merkel and the president of the USA Barack Obama have reached an agreement on anti-Russian sanctions. Will it be regarded as harmonizing attitudes or commitments from Washington?

– Any “agreement” between Washington and Berlin means at the end, that the US expresses its will and Germany obeys. Especially when it comes to the anti-Russian sanctions it becomes very obvious. Because Germany sanctions itself by harming the relations with one of our most important natural partners: Russia. We shouldn´t see Angela Merkel as an “independent leader” at all in that context. Of course she tries to sell those agreements as “in German interest” to the German people. But a real independent German chancellor who would act on behalf of German interests would have refused the US demands.

DT: Again we hear criticism of US and European officials on contempt Minsk agreement by Russia. We recently visited the Donbas together and we can confirm that the Ukrainian army does not respect the peace agreement and that they shoot the civilian population. How do you comment on these false accusations against the RF which in this conflict does not participate at all?

– I remember our little trip to Donetsk with the sounds of explosions. The war is present there all the time. Ukraine´s President Petro Poroshenko stated many times in the past that he wants to gain full control of Donbass and even Crimea. Every action of the Ukrainian army and the terrorist “volunteer” units supporting Kiev can be only executed with the permission and support of the West. If the West would stop its support for Kiev today the war would end tomorrow. One of the main important narratives of the Western political propaganda – and for Kiev! – is the story of the “Russian invasion of Donbass”. It is so important because it disguises the reality about that war and blames Moscow as the “big evil player” on the Donbass-battlefield. The narrative of the “Russian aggression” provides the justification for the concentration of NATO troops in Eastern Europe; it delivers Washington and Brussels the argument as to why US troops are still “needed” in Europe – 25 years after the end of the cold War.

DT: Why Germany as a party that is a guarantor of the peace agreement doesn’t doing anything to force Ukraine to fulfill contractual obligations?

– The role of Berlin in the context of Minsk II is embarrassing. Germany missed the chance to show real responsibility. It is somehow ironic in a sad way: German politicians love to travel around and to schoolmaster half of the world about “Human Rights”. But when it comes to urge Kiev to fulfill the paragraphs of the agreement, these “globe trotter politicians” completely fail.

DT: Tell us something about the relationship of German business and the German people toward anti-Russian sanctions. Do they support Germany’s official policy towards Russia?

– I will give you an example: Franz Wiese, a Brandenburg parliament lawmaker and a member of the Alternative für Deutschland (AfD) party, said, Merkel’s anti-Russian policy has caused until now 90 bankruptcies in Germany. That shows: Anti-Russian sanctions are at the end of the day anti-German sanctions. The result of a survey from 2014 speaks also with a clear language: The poll said only 38 percent of respondents viewed economic sanctions as a suitable instrument to change Russia´s stance.

DT: How do you assess the current political situation in Germany? Is there a real opposition and an alternative political scene, which in the future could have a greater importance?

– The political parties in the Bundestag – except some parts of the Left party – agree in all decisive political fields. They all support NATO military adventures, they all support the EU politics and they all advocate the ultra-liberal agenda of mass migration, Gender Mainstreaming and LGBT propaganda. You won´t find big differences between the so-called “conservatives” (Angela Merkel´s CDU is called “conservative” by the way) and “progressives” like the Greens or Social Democrats. But with the new eurosceptic and sovereignist AfD party there might be a glimmer of hope. They were successful in the last regional elections and reached in Eastern Germany always around 10 percent.

DT: Recently, the public found out about yet another affair in which participated BND. There are allegations that the BND eavesdropped Austrian institutions for the CIA. In one of your interview with RT you stated that the BND is merely a branch of CIA?  Is there anything else to add?

– Not at all. Our intelligence services are not serving the national interest as well. Obviously they are serving the big brother in Washington. A real “German” intel service would improve its counter-espionage against the NSA spying attacks against the German public, German politicians and German business.

DT: What the public opinion in Germany thinks about the American influence on German politics?

– Especially since the NSA scandals the public opinion in Germany becomes more and more critical towards Washington. In West-Germany we were told for decades that the Americans are our “friends and partners”. But even the most dedicated “I-love-the-Route-66-and-Florida”-groupie realizes sooner or later that “friends and partners” don´t behave like that. A survey of the Pew Research Center from 2014 showed that the positive image of the United States slipped significantly. In 2009 64 percent of the Germans saw the US favorably; in 2014 it was just 51 percent. Germany made it in Pew Research Center list of the top 10 US critics.

DT: Will the United States be able to impose new conditions to Germany regarding the transnational trade and „investment“ partnerships? What does the US invest in Germany (except its own military bases)? Are the US economic interests in the EU connected to the Ukraine conflict?

– Critics of the TTIP say Germany will have less control over the quality and content of goods – particularly food – and that German businesses could be negatively affected. TTIP will compromise European governments´ (rest-) autonomy and leave them at the mercy of multinational corporations. The investor protection dispute settlement (ISDS) mechanism in the trade deal will allow companies to sue governments. Today Germany is the sixth largest export market for the United States. In 2010, American goods and services exports to Germany rose to 73.5 billion USD. German goods and services exports to the United States in 2010 were 113.7 billion USD. German exports to the United States are larger than German exports to China and India combined. But we speak about rapidly growing markets outside the Western world. Washington will of course try to keep Germany – the economic power house of Europe – in its sphere of influence. And of course NATO is an instrument of such politics. What we witness now with the conflict in Ukraine shows exactly the purpose of the alliance as the first Secretary General of NATO Hastings Ismay described: “To keep the Russians out, the Americans in, and the Germans down”.

DT: Thank you very much for this interview Mr. Ochsenreiter 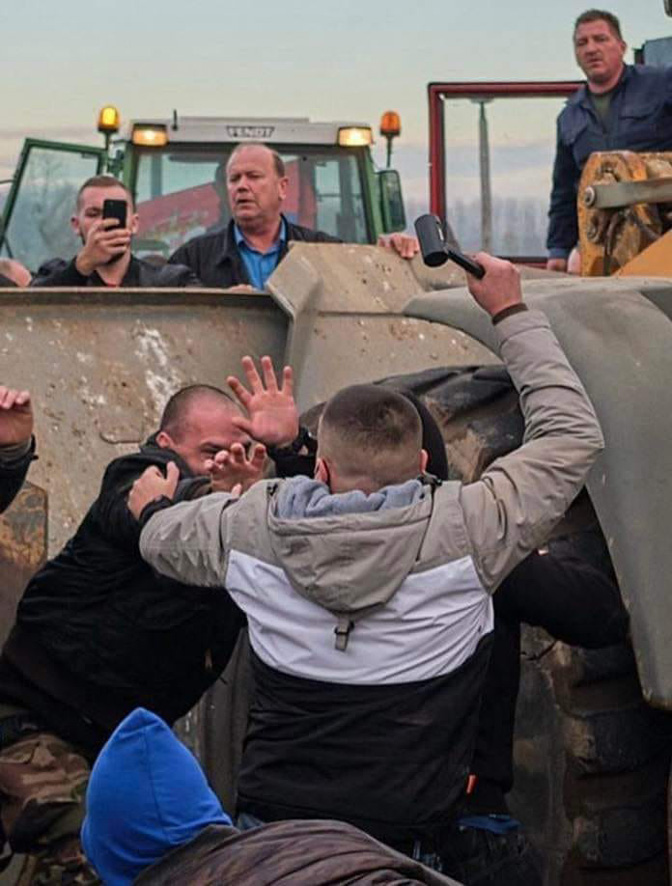